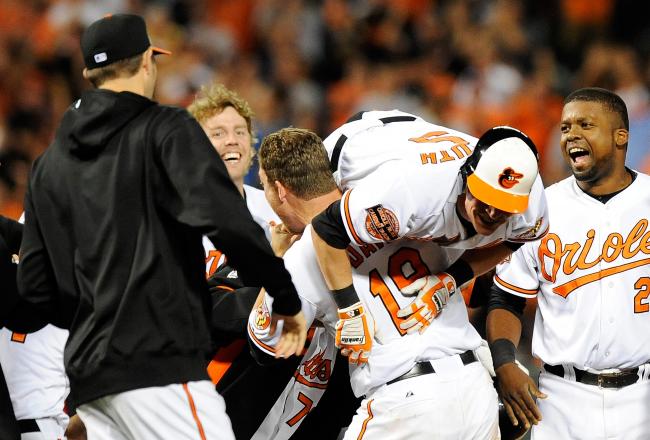 The Baltimore Orioles, tied for 1st in the AL East, are in action today and currently involved in yet another extra innings game, this time against the 3rd place Tampa Bay Rays. The Orioles are 80-62 and just 2 wins from their first season over .500 since 1997, but they have the run differential of a 69-73 teams, because they’ve been outscored by 21 runs. It’s a baffling feat, particularly in the AL East, which is routinely baseball’s toughest division, and it’s just a part of what makes this team one of the quirkiest in baseball history. Don’t believe me? Well then, let’s take a look at some of the facts.

– They’ve also won 12 straight extra inning games, the longest such streak in baseball since Cleveland won 13 in a row in 1995.

– According to the phenomenal Jonah Keri, the O’s are also posting one of the biggest differentials in actual record and Pythagorean record of all time. Baltimore is still playing 11 games above their Pythagorean record of 69-73, which would be the 4th biggest positive difference in history.

That historically, unusually innate ability to win one run games and extra inning games is owed somewhat to a very good bullpen. For most of the season the O’s been has ranked in the top 3 in baseball in ERA, but a 2nd half slide has dropped the team down to 7th. Is their record in one run games sustainable? I don’t really know since they’ve defied the odds all year, but I would guess not.

Over the last week the O’s bullpen has struggled to hold leads, blowing games open multiple times against New York and Tampa Bay. Pedro Strop has been rocked for an 8.00 ERA over the last month of the season. Jim Johnson has been hit around a little bit, and would have blown an easy save wide open if it weren’t for Jerry Meals affinity for blowing very easy calls between competitive teams in close games that have implications in the standings (see: Pittsburgh-Atlanta, 2011). The O’s also ranks just 20th in baseball in runs scored from the 7th inning on, which is odd for a team that leads baseball in extra inning wins.

Bullpens are among the streakiest entities in sports. If you take a look around the league, other teams with similarly outstanding bullpens haven’t had this type of luck in one run games. Cincinnati has the lowest bullpen ERA in baseball, a half-run lower than Baltimore, and they are only 26-19 in one-run games (.588 win $%). Oakland has the next best bullpen ERA and they have a similar record. Tampa Bay also has a top-flight bullpen, yet they’re just a measly 20-25 in one run games, which is just as puzzling as the O’s excellent record in these type of games.

But you can also look at Baltimore’s record against the AL East, 34-24, and surmise how they’ve been able to stay in the race. If you win the important games against the teams in your division, it’s the quickest route to the top. Baltimore is also an elite homerun hitting squad, ranking 3rd in baseball in dingers with 185 total, which can make up for deficiencies in batting average (9th in AL) and on-base percentage (11th). Adam Jones is having the best year of his career, hitting .288 with 29 homers and 74 RBI, and Mark Reynolds has been killing the ball over the last month, bombing the Yankees for 7 homers in the last 2 weeks.

The team also plays good and innovative defense. Baltimore also ranks in the top half of the league in defensive efficiency while ranking in the top 5 in baseball in shifts used. Baltimore has potential Gold Glove winners in catcher Matt Wieters and shortstop JJ Hardy. Those are also the two most important positions on the field, and having great defenders at both is a huge plus to any team.

Youngster Manny Machado was called up to play 3rd base (he played shortstop in the minors) and has not only impressed with his bat (.272, 4 HR, 14 RBI in 31 games), but has proven to have a strong arm and good instincts. He’s also keeps his head in the game, you can ask the Rays Rich Thompson about that. His promotion has also allowed the Iron Gloved Mark Reynolds to move off of 3rd base, where he was a nightmare, and over to 1st base, where he’s been surprisingly passable.

The O’s have also responded at every turn this year. A number of players have stepped up when big things have been asked of them. Taylor Teagarden has just 6 hits in nearly 50 at-bats on the season, yet 3 of those have given Baltimore the lead. Lew Ford and Nate McClouth were picked up off the scrap heap and both players have made some big plays. McClouth, in particular, has been an excellent find. He hit a walk-off homer against Tampa Bay last night to give the Orioles a 3-2 win, and in 35 games he’s hit .279/.350/.418 (110 OPS+). Dan Duquette, the GM of the Orioles, has done an excellent job finding parts that nobody else wanted. Just look at his pitching staff.

Wei-Yin Chen came over from the Nippon Pro League in Japan just like Yu Darvish this season, only he came much cheaper and with much less fanfare. Chen has pitched just as well as Darvish, going 12-9 with a 4.00 ERA in 175.2 innings this season, striking out fewer batters while exhibiting much greater control. Jason Hammels came at the cost of Jeremy Guthrie, who was bombed in Colorado but has since pitched nicely since being traded to Kansas City. Hammels has provided 118 valuable innings with a 122 ERA+ and a robust 8.6 Ks per 9 rate.

Don’t get me wrong though. For all that has gone right for Baltimore this season, they still rank 16th in baseball in runs scored, and 19th in fewest runs allowed. Those aren’t exactly the hallmarks of a playoff team, but when you consider the fact that Baltimore has been damn near unbeatable in close games, it’s easier to see why they’re so competitive. I’ve been one of Baltimore’s detractors this season, counting them out at every turn, and with their 2nd-best hitter (Nick Markakis) out, I still think Tampa Bay will pass them. It just may not happen until the final 3 game set at The Trop at the end of the season, when both the Rays and O’s may be fighting for a playoff spot. Either way, with the Yankees injured and slumping and an extra Wild Card spot available, Baltimore will be in it until the end.