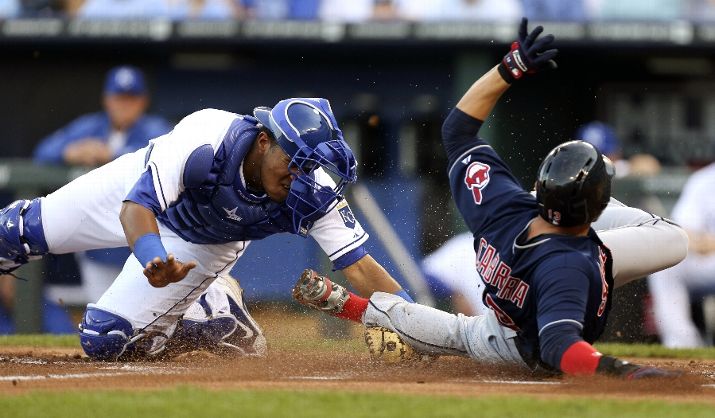 After spending the better part of the past decade lost in the baseball wilderness, the Kansas City Royals and Cleveland Indians have finally found a way out. The two ball clubs sit 2nd and 3rd respectively in the AL Central and they’ve both been playing well of late, posting identical 7-3 records in their past 10 games.

Kansas City has been getting it done on the mound thanks in large part to a rebuilt starting staff that currently ranks 5th in baseball in ERA. New additions like Jeremy Guthrie, Ervin Santana, and James Shields have quickly made Royals fans forget the days when Bruce Chen and Luke Hochevar were the best the franchise had to offer. A 17-11 start has only furthered the thought that the Royals might end their playoff drought, closing the door on a nightmare that began all the way back in 1986.

Cleveland is also enjoying a baseball renaissance of sorts, but they are getting the job done in a whole different way. The Indians have used their bats to rebound from last year’s 94-loss disaster, leading the American League with 40 homers already. Their own offseason acquisitions, which included the likes of Nick Swisher and Mark Reynolds, are hitting balls out of the park at such great frequency that fans in the outfield must be alert at all times. New manager Terry Francona has Cleveland playing loose, winning 7 of their last 8.

But all the improvements in the world still may not be enough to topple a loaded Detroit Tigers squad in the AL Central. The Tigers have already run their record out to an impressive 19-11 and after dismantling the Astros over the weekend they look like the best squad in the American League. Prince Fielder, Torii Hunter, and reigning MVP Miguel Cabrera have all been on-base fiends this season, powering what has been the 2nd best offense in the AL up to this point.

Not to be outdone, the Tigers pitching staff has been just as impressive posting an absurd 3.37:1 strikeout to walk ratio. If Verlander and co. can keep that up for the entirety of the season, they’d surpass the 2011 Phillies staff for the best K:BB rate in baseball history. Justin Verlander, Doug Fister, Anibal Sanchez, and Max Scherzer are all averaging more than 6 innings per outing and their combined record is 15-4 thus far. And the scary part is that Detroit’s staff is so talent-laden that they could reasonably keep this up for the remainder of the season. If that’s the case then it’s worth asking: do Cleveland and Kansas City even have a chance to keep up with the Tigers? Let’s start with the Royals:

Well, from the Royals’ perspective, if they are going to make some noise in the Central they will need a couple more bats to come alive. Their prized, young corner infielders, Mike Moustakas and Eric Hosmer, have yet to hit much of anything on the season, combining for just 1 homer and 15 RBI in over 200 plate appearances.

In Monday’s game against the White Sox it was more of the same for the duo. Moustakas put up yet another stinker, going 0-4 with 3 strikeouts while grounding into a double play the one time he put the bat on the ball. Hosmer wasn’t much better, picking up a hit in 4 plate appearances to bring his season average to a meager .258. These two players were the crown jewels of one of the most highly touted farm systems in baseball history, and thus far in their young careers the hype hasn’t been justified.

Alex Gordon and Billy Butler are among the best in the league at their respective positions and the rise of some of the less touted players like Lorenzo Cain (.337 average, 1 homer, 16 RBI, 4 steals) and Alcides Escobar (.282, 3 homers, 13 RBI, and great D at short) has been great. But if Hosmer and Moustakas don’t get going, the Royals will struggle to win the 90-95 games it’s going to take to finish above Detroit.

This Cleveland Indians ball club is particularly interesting to me, mostly because they seem to be taking the 2012 Orioles approach to the extreme. The O’s, if you remember, feasted on timely homers and relief pitching a year ago, and the combination of the two was enough to push them above 90 wins and into the playoffs. Baltimore also enjoyed timely jumps in production from Adam Jones and Chris Davis and just about every iffy move the O’s made –giving McLouth the left field job after two years of sub-.200 hitting comes to mind– paid off.

Well, to this point in the season, Cleveland has followed that blueprint to the letter. No team in the American League has cleared the fence more often than the Indians, led by Mark Reynolds 9 moon shots already. Catcher Carlos Santana is raking as well, leading the American League in OPS while drawing nearly as many walks as strikeouts. At age 27 he finally appears to be tapping into his full potential and the results have been spectacular. And when Santana and co. are able to slug their way into the league the Indians bullpen has been lights out. Three of the four most used relievers in the Indians bullpen have ERA’s that start with zero, and the bullpen as a whole has allowed opponents to hit for a pathetic .207 average. That’s downright Oriole-like.

But Cleveland isn’t without some big issues. Apart from Justin Masterson the Tribe’s starting rotation couldn’t be more of a mess. Ubaldo Jimenez has spent the better part of the past two years playing human pinata on the mound, taking a beating each time he takes toes the rubber. Trevor Bauer has shown flashes of brilliance but he can’t go more than a couple batters without issuing a free pass and Brett Myers has remembered that he’s well, Brett Myers. Things have gotten so desperate for the Tribe that Corey Kluber has been moved from the bullpen to the rotation for the time being.

If Cleveland really has designs for winning the AL Central this season they are going to have to get creative in trading for pitching. The Tribe’s offense should be able to keep the team in the game most nights, but that doesn’t automatically lead you to the promised land. The rotation trio of Masterson, Jimenez, and Zach McCallister ranks among the most uninspiring top 3’s in baseball and at some point they will bury the Indians under all the runs they give up.

As great as it would be to see one of these two ball clubs overcome the reigning division champs, it just doesn’t seem like much of a possibility. I think that Kansas City has a shot at giving Detroit a run for their money but that’s if and only if their prized young corner infielders start hitting. Cleveland’s rotation just isn’t good enough to win more than 80-82 games and unless they make some upgrades mid-year, I’m guessing that’s their ceiling. The Royals look like a team hellbent on 85-90 wins and they’ll only be able to crack that upper stratosphere if Moustakas and Hosmer start hitting like the prized prospects they once were. If that doesn’t happen you might as well pencil the Tigers into the playoffs because Miguel Cabrera, Justin Verlander, and the rest are just too talented.